Who doesn’t love saving money using electrician coupons?. We live in a time where pinching pennies isn’t just for frugal moms anymore. Not only do we want to save money, but most of us have to for one reason or another.

Since 1948 always the leader in its field of Electrical Contracting.

We always mark down our services cost to senior citizens, fellow military veterans, and first responders. Our electricians are licensed, bonded and insured DC, MD, and VA. We use only top of the line UL approved equipment and materials. Your safety and satisfaction are most important to us. 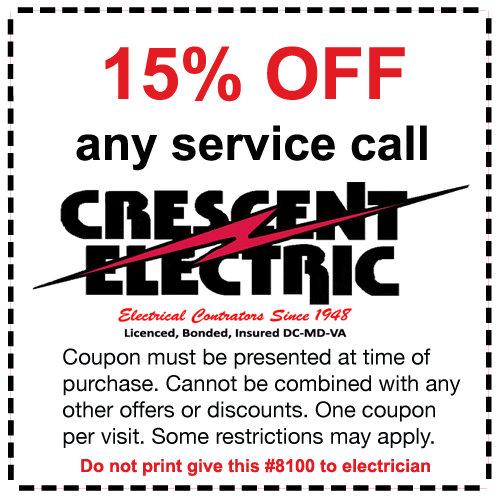 What Our Customers Are Saying

Don’t just take it from us, let our customers do the talking!

“June 2016 We experienced a power surge one week ago. Our oven (electronics fried). Our surrounding sound components cooked also, as well as our satellite receiver. The transformers on the furnace, telephones, and modem burned out. Our air-conditioner would not come. Several light bulbs blew out along with several fluorescent lights in the recreation room. Lucky my cell phone was working. I put in the words electrician Washington DC and up came Crescent Electric. Crescents Electrician assessed the damage restored power where safe to do so, got a list of needed parts and returned next day with help. We had installed a square D whole house surge suppressor installed. The job now complete. I used electrician coupons paying the invoice. Thanks, Gene, Greg, & Brian. “

“I am an Electrical Engineer although having studied power surges in the past; I never had much of an opinion on surge protection until just recently I had a surge. You could see it happening. The lights would go between dim, normal and bright. Some breakers would trip. This surge burned up a surge protector strip which in turn, burned up the power supply to some electronics plugged into the strip. It seemed the surge loved to destroy transformers such as furnace and A/C unit. I called a fellow worker and friend to see if he knew of an electrician I could contact, he highly recommended Crescent Electric.  I called Crescent talked to Gene, and he sent me an electrician whose name was Bob. Soon after Bob checked the main power panel, he informed me I had grounding problems. Bob found loose ground connections in the main electric panel. Also, the ground clamp was knocked off the ground rod apparently from grass mower. Bob, the electrician, fixed all problems and then made a suggestion I use online electrician coupons to help purchase a whole house surge suppressor. I took him up on his proposal, and I now have a new square D surge suppressor. ( tree limb caused power surge)”

“Searching the internet for an Electrical contractor to upgrade my electrical service I came across Crescent Electric electrician coupons, just loved the update panel change with free a Power Surge suppressor installed, Best move I could make (i am a shopper). Just had whole home surge protector system installed along w/new electric panel to code. I want to pass on some electrical information I learned from Gene Crescent Electric Master Electrician.
The majority of surges begin within the home, such as when major appliances cycle on and off. Over time these surges can degrade (ware-out) circuitry in electronic devices and components, shortening the lifespan of the product. Most people are only concerned about surges entering the home from an external source. (power lines, lightning, etc.
Today all homes need whole house surge protection, and it should become standard with every home in this era of the Internet and things to come. Homeowners are increasingly reliant upon connected devices for health and safety. However, once installed most whole house surge protectors require owners to check to see if the surge protection is active by examining the devices LED. The protector could fail between inspections leaving homeowners vulnerable to destructive hits. The best approach would be to install a Commercial Class Whole House Surge Protector that lets you know when it is worn out. This alert allows homeowners to quickly arrange for the replacement to reduce the amount of time they’re left unprotected. You can learn more by viewing the following Youtube Video.”
https://www.youtube.com/watch?v=7Dj33YVppDk

Explain Why I should Choose Crescent Electric Electricians

We are proud of the work we do and want all of our customers to be 100% satisfied. We offer competitive pricing, senior citizen discounts, and flexible payment options. We hire only electricians that have been background checked and excel in their work and will be representational of our company’s high standards. We sincerely hope for the opportunity to work with you now or in the future.

We offer Lifetime craftsmanship warranty on all labor. Manufacturers warranties cover all defective materials and devices and return policies. All installations by Crescent Electric conforms to local code authority. We Do It Right The first Time!

Do You Service My Neighbourhood?

Yes, We have serviced the entire Washington DC metro area since 1948. We held one of the first Arlington County Electrical Contractors Licence issued. Our first concern is your satisfaction and safety.

GET TO KNOW US

LET US HELP YOU

Simply Best Electricians
Over 150,000 Happy Customers
Check Out Our Coupons

HAVE AN ELECTRICAL PROBLEM? WE’RE HERE TO HELP YOU!